The key report this week is the January employment report on Friday.

Other key indicators include January vehicle sales, the January ISM manufacturing and non-manufacturing indexes, and the December trade deficit.

Here is a long term graph of the ISM manufacturing index. 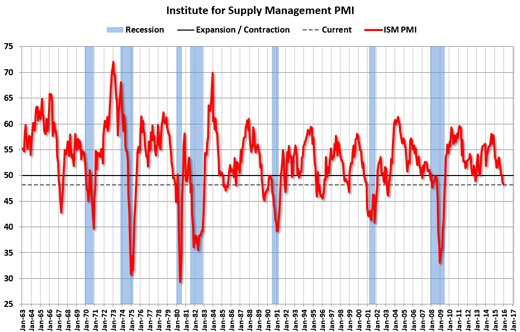 The ISM manufacturing index indicated contraction at 48.2% in December. The employment index was at 48.3%, and the new orders index was at 49.2%.

10:00 AM: Construction Spending for December. The consensus is for a 0.6% increase in construction spending.

This graph shows light vehicle sales since the BEA started keeping data in 1967. The dashed line is the December sales rate. 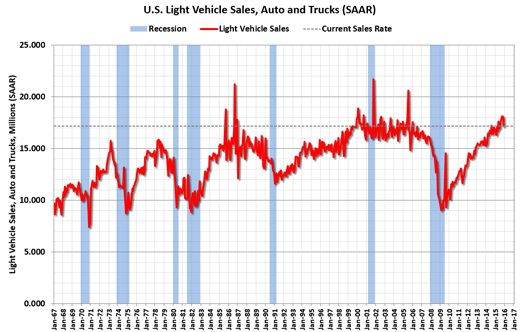 8:15 AM: The ADP Employment Report for January. This report is for private payrolls only (no government). The consensus is for 190,000 payroll jobs added in January, down from 257,000 in December.

10:00 AM: the ISM non-Manufacturing Index for January. The consensus is for index to be increased to 55.5 in January from 55.3 in December.

8:30 AM: The initial weekly unemployment claims report will be released. The consensus is for 280 thousand initial claims, up from 278 thousand the previous week.

10:00 AM: Manufacturers' Shipments, Inventories and Orders (Factory Orders) for December. The consensus is a 2.8% decrease in orders.

The consensus is for the unemployment rate to be unchanged at 5.0%.

This graph shows the year-over-year change in total non-farm employment since 1968. 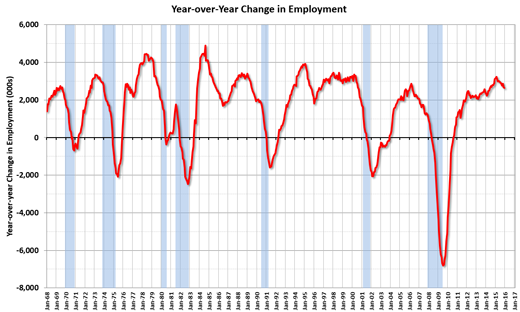 In December, the year-over-year change was 2.65 million jobs.

A key will be the change in real wages - and as the unemployment rate falls, wage growth should pickup.

8:30 AM: Trade Balance report for December from the Census Bureau. 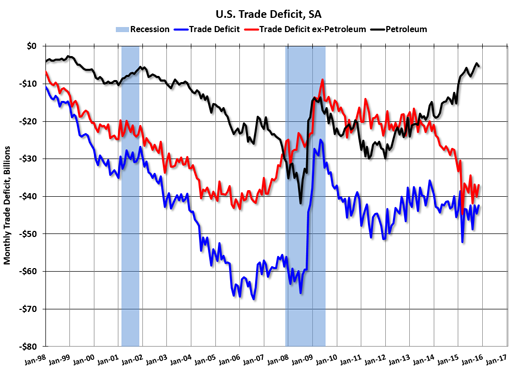 The consensus is for the U.S. trade deficit to be at $43.0 billion in December from $42.4 billion in November.

3:00 PM: Consumer Credit for December from the Federal Reserve. The consensus is for an increase of $16.5 billion in credit.