The key economic report this week is January retail sales on Friday.

The focus will be on Fed Chair Janet Yellen's Semiannual Monetary Policy testimony to the Congress.

10:00 AM ET: The Fed will release the monthly Labor Market Conditions Index (LMCI).

10:00 AM: Job Openings and Labor Turnover Survey for December from the BLS. 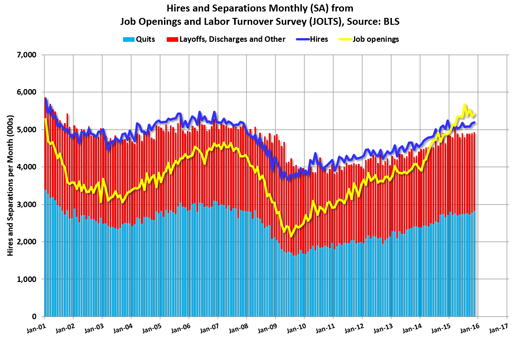 Jobs openings increased in November to 5.431 million from 5.349 million in October.

10:00 AM: Testimony by Fed Chair Janet Yellen, Semiannual Monetary Policy Report to the Congress, Before the Committee on Financial Services, U.S. House of Representatives

8:30 AM: The initial weekly unemployment claims report will be released. The consensus is for 281 thousand initial claims, down from 285 thousand the previous week.

10:00 AM: Testimony by Fed Chair Janet Yellen, Semiannual Monetary Policy Report to the Congress, Before the Committee on Banking, Housing, and Urban Affairs, U.S. Senate

8:30 AM ET: Retail sales for January will be released. The consensus is for retail sales to increase 0.2% in January. 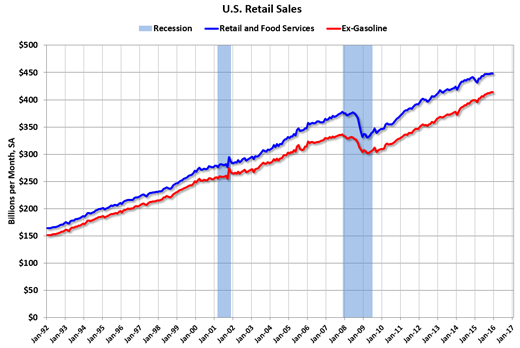 10:00 AM: University of Michigan's Consumer sentiment index (preliminary for February). The consensus is for a reading of 92.5, up from 92.0 in January.

10:00 AM: Manufacturing and Trade: Inventories and Sales (business inventories) report for November. The consensus is for a 0.1% increase in inventories.