The key economic report this week is January housing starts on Wednesday.

For prices, PPI and CPI will be released this week.

From manufacturing, January Industrial Production and the February NY and Philly Fed manufacturing surveys will be released this week.

All US markets are closed in observance of the Presidents' Day holiday.

10:00 AM: The February NAHB homebuilder survey. The consensus is for a reading of 61, up from 60 in December. Any number above 50 indicates that more builders view sales conditions as good than poor. 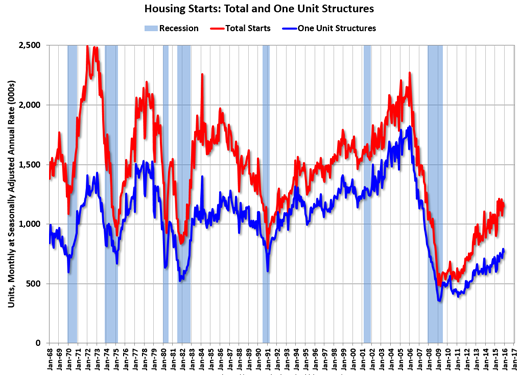 The consensus for 1.175 million, up from December.

8:30 AM: The Producer Price Index for January from the BLS. The consensus is for a 0.2% decrease in prices, and a 0.1% increase in core PPI.

9:15 AM: The Fed will release Industrial Production and Capacity Utilization for January.

This graph shows industrial production since 1967. 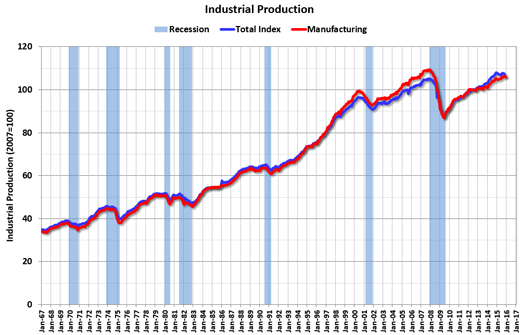 The consensus is for a 0.4% decrease in Industrial Production, and for Capacity Utilization to increase to 76.7%.

During the day: The AIA's Architecture Billings Index for January (a leading indicator for commercial real estate).

8:30 AM: The initial weekly unemployment claims report will be released. The consensus is for 275 thousand initial claims, up from 269 thousand the previous week.